I headed out to hike the remaining 74 miles of Section H of the Washington PCT. This was a somewhat impromptu hike, as I’d planned to be hiking Section J with a friend. Alas, she contracted COVID-19. I figured I’d go knock out some miles along the PCT I’d not previously hiked. Land of the Cowlitz, Klickitat, Siletz, and Yakama Nations.

I decided to quit by noon of the second day. It was a reminder of the importance of sport-specific training: I’ve been running a lot, but running taxes the body differently than walking while carrying a 25-pound pack. And I’ve not been running hills because I’ve been focusing on keeping my heart rate between 110-130 bpm. My legs were completely unprepared.

The first day was fine. Jim dropped me off at Big Mosquito Lake shortly after 1 p.m. Monday. On the drive to Big Mosquito Lake, I saw a few points of interest on the map that I hadn’t noticed in previous trips through the area. We stopped at the Basket Tree Interpretive Site & Langfield Falls. Basket Tree Interpretive site has a couple of large cedar trees from which the bark was stripped. A sign described all of the things indigenous people would – and still do – make from the bark & underbark. The sign also noted that while bark-stripped cedar trees are found from Alaska to Idaho, the largest concentration of them are in the Gifford Pinchot National Forest.

Langfield Falls was also a worthy detour. A short walk to the plunge pool of a lovely waterfall and interesting geology. Jim expressed concern about delaying the start of my hike, but we agreed the two stops were worth the time.

In the first quarter-mile or so on the trail, I passed about a half-dozen thru-hikers taking their afternoon break. It was the heat of the day, so they can’t be faulted for taking a nap or just getting off their feet for a while. This area of the PCT is close to the small town of Trout Lake, and Trout Lake has fully embraced its role as a resupply point. Locals run shuttles to & from the trail, and the local cafe and grocery store are very hiker-friendly. Trout Lake has become a must-stop place for thru-hikers. Because of this, the hikers on the trail in the area are frequently either waiting for a shuttle to town or have just returned from town.

My Garmin Fenix 5 is beginning to show signs of its battery’s imminent demise – GPS tracking can drain it very quickly. I decided ahead of this trip I’d use the InReach & the app on my phone to tell me how far I’d hiked. Navigation on the PCT is pretty easy (most of the time), and I don’t need to know exactly how many feet I walked and how many feet of elevation I gained & lost during a day. (I want to know it, but I don’t need to know it.)

I planned to take a selfie every mile on the trail, like I did when I hiked Section J in 2019. But because I wasn’t using my Garmin to track this hike, I found myself obsessively checking the FarOut app to see how far I’d hiked. I was spending too much time staring at my phone, so I stopped doing the mile selfies.

I spent the first night near White Salmon River & Road 23, about ten miles from where I started. I had to get to that point because I needed water, and it was a good place to stop for the day. I was surprised to see the camp area close to full given that it was still relatively early — thru hikers tend to hike until very close to sunset — but I’m guessing a fair number of them had just spent the day in Trout Lake & wanted to rest up while digesting all that town food. (It’s referred to as a “nero day” — “near zero.”)

There was one spot in with the tents where I could have hung my hammock, but it would have broken up the easiest path through the camp. I decided to hike a bit further. (There’s another water source about a mile up trail; I still had enough water & daylight to keep going.) I found an okay place to hang my hammock where no one would put a tent — the ground was too uneven. I didn’t bother hanging the tarp because it was quite warm and no rain was predicted overnight. Dinner was cold-soaked spaghetti with Italian sausage. (I didn’t bring a stove because of how warm the weather is, and I generally cold-soak my food regardless. The meat stays a bit crunchy, but a hungry hiker doesn’t care. Oil & cheese make everything delicious.) Pre-trip, I packed my Ursack somewhat haphazardly. In camp, I reorganized it a bit & put what I planned to eat the next day in the top of the bag, and then tied it to a tree a ways away from my camp & the neighboring camp. I laid on the ground for a while with my feet up on a tree to try to drain some of the fluid from my legs. This always feels so magical!

I struggled to get to sleep that night — I rarely sleep well the first night on the trail. But it felt amazing to by lie in my hammock, feeling the breeze move over me. I saw a few flashes of lightning overnight, but I didn’t hear any sound. We’re getting close to a full moon but between the way I had my hammock aligned & the tree cover, the moon wasn’t too bright for me to sleep. (I once yelled at the moon for being too bright. Yes, I think that’s ridiculous, too.)

I woke at about 5:30. I like to lie about in the hammock for a bit before starting my day. It gives the time to read morning prayer, stretch my muscles, rotate a few joints, and generally see how my body feels. My body had a lot of feels. My glutes were feeling weary over the last few miles of Monday’s hike, and they weren’t exactly happy the next morning. My feet & ankles were weary. My calves were tired. Nothing achy, just weary. I knew the day would start with two miles of climbing – never my favorite way to start the day – so I started slowly. Very, very slowly.

My plan for day two was to hike to Adams Creek. It’s about 13 miles from where I camped the first night. I usually average about two miles an hour, so I figured I’d get to Adams Creek in mid-afternoon. Reports are that Adams Creek is running high & fast; given my sketchy balance & questionable water crossing skills, I wanted to get to the creek & evaluate whether I should cross it then or camp nearby & cross it in the morning. (Snowmelt-fed creeks tend to be highest in the evening because of the day’s heat.) But I didn’t get that far.

After that initial climb, there’s another three miles of climbing with one pitch that felt particularly steep, and then another four miles of climbing. A good chunk of this part of the trail goes through an old burn area. There’s a spring a short distance off the trail that is, as one FarOut user described it “a full on creek coming out of the ground.” The burn is probably a few decades old so the land is well on its recovery path, but the spring is an oasis. Hikers have created a small area off the trail for folks to take a break. This area is about 30′ from the spring itself, so the spring isn’t getting trampled. (The water is shooting out from some rocks – full-on “Moses in the desert” – so the spring is naturally pretty protected.) The day was warm and muggy, and that cold water was a blessing. I took advantage of how cold the water was to make some pudding. I like pudding, but I generally don’t get excited about it. While hiking? Pudding is ambrosia. It’s divine intervention. It’s just perfect. 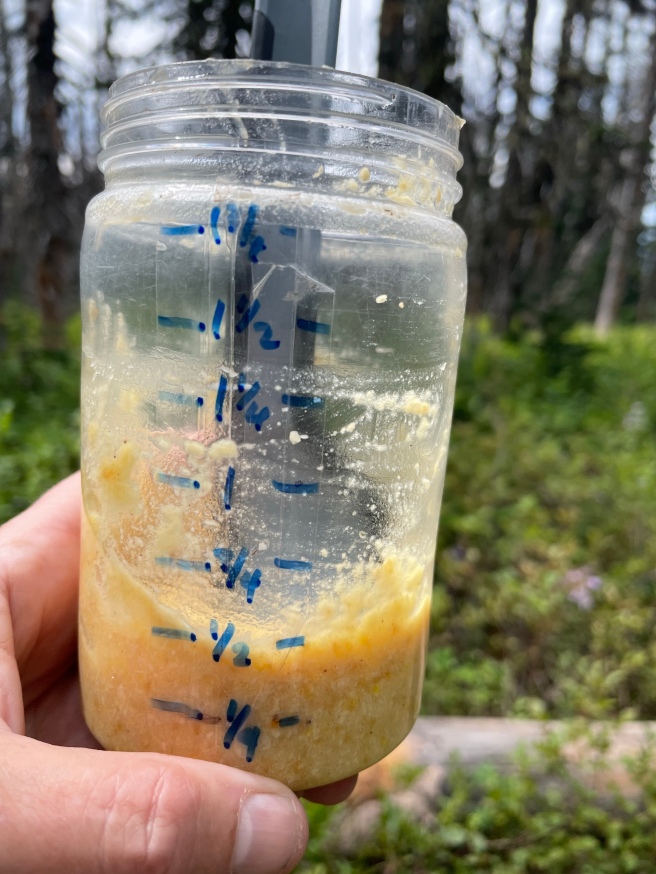 It was the thought of another four miles of climbing that did me in. I tried everything to boost my spirits. I was eating pudding – how much better can life get? I sang show tunes. I sang sea shanties. I reminded myself that Second Chance started off his PCT thru-hike attempt doing four-mile days. I reminded myself that even if I was only moving at 1 mph, I’d still make it to Adams Creek by 6 p.m. – plenty of daylight left. I told myself how horrible I’d feel for quitting too early. I quit anyway.

I don’t think I was even making 1 mph going up that hill. It was just too much. I felt like crap for turning around. I figured as soon as I turned around, I’d start feeling good & then I’d question my decision to quit. That didn’t happen — even on the flats & gentle descents, I was moving pretty slowly. I took a lot of breaks; they helped but only minimally. Turning around was the right decision. I could have kept going, and in a few days my legs probably would have been fine. But this wasn’t the start of a thru-hike (almost everyone suffers the first few weeks of a thru-hike). I expect some part of a multi-day hike to suck, but there’s a limit to how much of misery I’m willing to tolerate.

Jim picked me up – at about 6:30 last night where he’d delivered several thru-hikers the day before – yay trail magic! We got home late, but I was still able to wish Trooper a happy birthday. (The Puppymonkeybaby is two years old!) I skipped the ibuprofen for my achy legs but I was able to sleep okay last night. My legs are pretty weary still, and I guess I’m reminded that I cannot head out on a week-long hike if I’ve done no hiking in the previous few months. I’d planned to wear a pack with about 20 pounds in it while walking the dog, but I haven’t. I paid for my sloth. I’m hopeful I can get back out on the trail in the next day or so – something shorter with less elevation gain.

Right now I’m doing laundry & looking at trail maps. My legs are stiff as all get-out, but when I carried my pack back into the house this morning it didn’t feel like death. And it’ll be lighter if I’m carry 2-3 days worth of food rather than 7-8. Another good night’s sleep & I’ll be ready to go!