Monday, I wrote a blog post about last Sunday’s Sage Rat Run Dirty Rat 15K Trail Run. As I was nearing completion, IE crashed. There was no saved draft of my lengthy post, which is highly unusual. It’s now Friday, and I’m willing to take another crack at writing I Am A Dirty Rat!

The run isn’t truly a trail run: it starts in Prosser, on paved streets, and then heads up into Horse Heaven Hills on a dusty, gravel road. Because of that, it lacked the challenge of dodging roots or significant rocks. However, the gravel was loose on some steep pitches, making for fast & fancy footwork. And it was a climb!

There were a few very steep – but thankfully short – pitches. Garmin showed my total elevation gain as 1240′. The course is an out-and-back: up the hill, down a bit on to an almost-flat plateau, and then back up a bit and then down down down.

The slight elevation gain on right before descending the hill made it crucial I have enough energy in the tank on the return – as if running down that hill wasn’t enough. I started off by walking the first ten minutes or so. Unfortunately, the flat ended right around ten minutes in. I went into the race expecting to walk up the hill, and mostly, that’s what I did. There were a few spots where the grade was mild enough I could run, but for the most part, my heart rate was higher while walking up that hill than it normally is at my endurance pace on flats.

The organizers took the care to put funny signs up on the plateau. Here is my favorite: 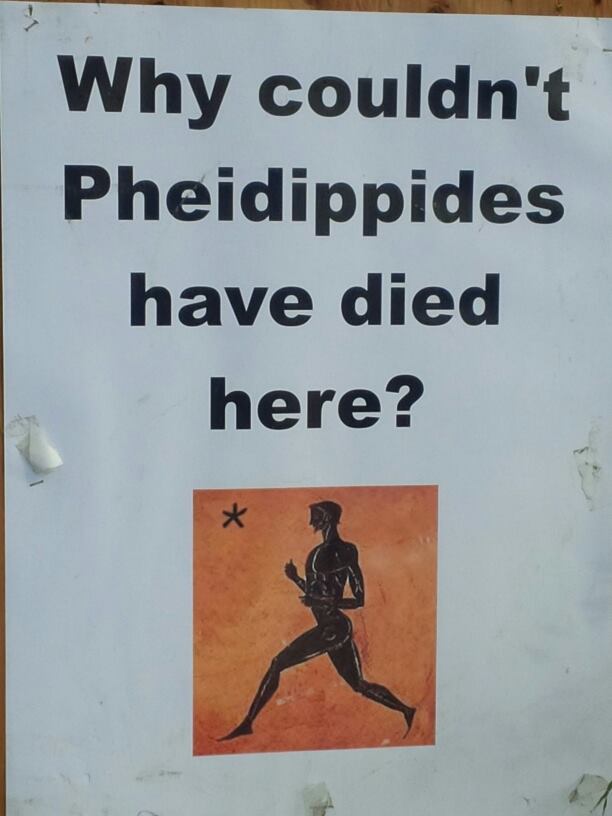 As I was on the “up a little bit” before the descent, I encountered another runner, Chris,  who was around me through much of the race. We ran down the hill together. My quads we doing fine, but my glutes were really getting tired. Her quads were wearing out. A few times I stopped to walk, and I suggested she keep going; she said she enjoyed the company more than she worried about making a certain time. She’d run one of the road races the day before, and she was shooting for the Rat Deux medal (an additional prize for completing two different runs on the weekend). She wasn’t in a rush.

Having another runner with me made it easier to keep going instead of slowing down as I tired — and believe me, I was tired! We finished together, and Chris thanked me for challenging her and setting a good pace for her. I thought she was just being polite by slowing down, because I was going faster than I otherwise would have.

We talked about coming back next year, and doing races both days. We’ll see how it fits in the calendar. I was a lot of fun. I’d hoped for a 14:00/mile pace; I averaged 15:09/mile. It’s not what I’d hoped for, but I’m still happy with it.

The best thing I got out of this race was that it’s a good reminder of what I’m going to need to do to be prepared to commit to training for the Badger Mountain Challenge 50K. I think I need to maintain a 15:26/mile pace to finish within the 8-hour cut-off. I’m well within that now, but this was a significantly shorter race with only one major climb and descent; BMC 50K is an out-and-back with four major climbs and descents on the way out, meaning there are the same four climbs & descents on the way back, too.

At this point, I believe I can do it. But I’m still planning to wait until this fall to decide. We’ll see how I do in training for the Multnomah Falls Trail Run and the Leavenworth Half-Marathon. If I train hard and make some gains in those events, I’m more inclined to commit myself to training for the 50K.

I’m glad I got a good race in last weekend, because I came down with a cold on Monday. I haven’t done any training all week. We were planning to camp this weekend, but now The Hubs is ill, too. I’m hoping to be healthy enough come Monday to get in a swim workout or an easy bike ride. I believe I’m over the worst of it: I’m coughing more, but I can breathe through my nose now. And I’ve been sitting upright while writing this, which is a major accomplishment!

Here’s a look at the medal, as well as what Garmin says I did on Sunday: 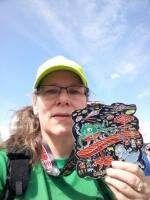 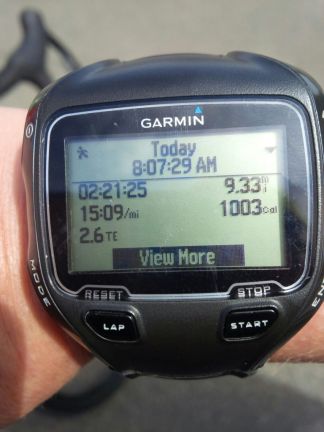