Heck of a way to wrap up a training week! The important part: I finished, and I accomplished my goal of learning what I can to ensure a better race for my 50K. I have a lot of work to do, but I have a lot of reasons to be confident, too.

I stayed in a hotel in Oak Harbor the night before the race. My parents live in Greenbank, which is about 30 miles from the race venue. I opted for the hotel to reduce my stress level before the race. I usually stay in a Best Western, and I made the mistake of assuming this one had a breakfast bar. It didn’t. I brought hard-boiled eggs from home — the eggs from the farm have so much more flavor than store-bought eggs, and I’ve grown a little spoiled — but I still needed my bagel & cream cheese. I headed to the nearest 7-11 in hopes of finding said food. The closest I could find was a sausage biscuit. It wasn’t terrible, and I’m happy to report I didn’t regret it immensely while running.

I arrived early enough to check in, walk back to the truck and change into race attire, then loosened up my legs. I knew I’d walk the first half-mile or so, so I didn’t worry about warming up. I went up & down a small hill sideways to warm up my hips and I did my best to wake up my quads. Here I am, feeling confident pre-race: 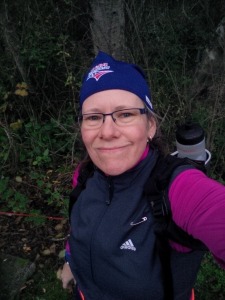 And here’s the happy folks I was running with:

The pre-race meeting was primarily warnings about the trail. This is a very damp place, and anything wood or rock is likely to be slippery. And there are cliffs. Don’t try to pass on the bridges over Deception Pass, because it’s a long fall (about 180′, depending upon the tide). And have fun! This is the course, along with the elevation profile: Deception Pass 25K

I did a lot of walking during this race, even in the early going. That 3,000′ of elevation gain and loss is not a misprint. The highest spot on the route is under 600′ above sea level, so you can imagine how rolling the trail must be to achieve that kind of gain & loss. It looks like an EKG. The flat spots were few & far between. It certainly gave me the opportunity to practice my power hiking. Here’s an example of a steep descent:

Early on, I met up with a run/walker who’d started ahead of me. She’s an experienced ultramarathoner, but she no longer does 50Ks because she can’t make the 8-hour cut-off. DP25K had two cut-offs: six hours for the full course, but runners also had to leave the aid station at Mile 8 by 2 p.m. My companion feared not making that cut-off. I stayed with her for quite some time. I’d occasionally think, “This is really costing me time,” but I also realized it was allowing me to save some energy for later in the race. When we finished up about the first five miles or so, I let her know we’d been racing for about 90 minutes. That gave her comfort that she was well ahead of the 2 p.m. cut-off.

The last I spoke to my companion was at about mile 6 1/2; she warned me off a tricky section of trail she’d just passed, and then she was gone. She was ahead of me for a while, and I didn’t see her again until the finish. (I stopped to  use the toilet at Bowman Bay. I’m glad I did, because there was a line at the one at the aid station.) I’d hoped to congratulate her on finishing well ahead of both me and the cut-off, but she appeared deep in conversation. I hope she checks out the Badger Mountain Challenge as I suggested – they let runners start an hour early, giving them nine hours to run the course. (She said she finishes 50Ks at around 8:15-8:20.)

Although I’d read the course directions repeatedly, it didn’t sink in that the first aid station wasn’t until Mile 8. I was inadequately prepared for that: I had three or four ounces of Jelly Bellys with me. I’d normally eat an ounce every three miles or so, but by the time I got to mile eight I’d already gained & lost nearly two-thousand feet and probably burned a thousand calories. I was very happy to get to that aid station, but I also couldn’t take in enough fuel to make up the deficit.

I also didn’t drink enough fluid. I was carrying two 22-ounce bottles, and there was still about half a bottle left. That means I drank less than a liter of water while running 15.5 miles. That’s not only insane, it’s almost suicidal. I’m having some trouble with staying hydrated while training during the winter. I don’t recall having this much trouble last winter while training for my first half-marathon. I’m trying to take a sip whenever I think about it, but that wasn’t enough on Sunday.

One possible solution is to start using liquid nutrition: that’ll take care of both problems, I hope. And that’s one of the reasons I did this race — I wanted to learn a few things to make running the 50K easier.

I never have a problem getting enough fluids in the summer. In fact, I sometimes drink too much, and that’s why I quit using liquid nutrition — it made my belly sloshy, and I hate that sensation. Another lesson learned: winter training is different! (Again, I don’t recall this being a problem last winter, but I was training for *just* a half-marathon.)

This isn’t a particularly pretty picture, but it’s of Bowman Bay – a place that has fond memories for me. The race ran us by the beach at Bowman Bay twice. Because I was one of the slowpokes, I was there when the Deception Pass Dash paddlers took off. And y’all think I’m crazy?

I walked almost all of the last five miles. Miles 12 & 13 were up Goose Rock, a place I  used to hike frequently when I lived on the Island. Mile 13 was a 31:00/mile. I was pretty spent, and I just wanted to get up & over the top of that rock. Once I did that, it was almost all downhill ~ prettier words were ne’er spoken, my friends. Sadly, I found it rather difficult to run, even on the descent. My feet were hurting, and heel-striking was far more comfortable that forefoot-striking and pushing off. (I’ve decided to carry Tylenol on long runs. It might have helped.)

On the descent, I realized I hadn’t been singing. I don’t have a voice that should be trotted out in public, but during long workouts, I find myself singing. It’s distracting, it helps me maintain a rhythm, and on trails it alerts people around the next corner I’m coming (this part is more important on a multi-use trail – it makes it less likely I’ll crash into a mountain biker.) The songs sung tend to pop into my head, and it can be anything from Canadian pop music to show tunes to Jimmy Buffett to sea shanties. Cole Porter joined me on the last few miles of the run. While Mr. Porter’s music delights me to no end, I’m afraid it wasn’t distracting enough to allow my brain to ignore the pain & exhaustion my body felt.

I finished. I’ll admit I would have liked to finish in four hours – had I achieved that, I could have deluded myself into thinking I could have run the 50K the day before (it has an 8-hour cut-off; the 25K runners get six hours). I finished at just under five hours. I think there were one or two runners behind me. I saw one of them, the DLF, come across the line. She hugged someone who appeared to be waiting for her, and began crying. This was clearly a very emotional finish for her. I think most of us at the finish line were emotional, just from watching her reaction.

All of the top-ten male finishers and the first female finisher (who came in fourth overall!) finished in half my time. Putting things into perspective, that’s not so bad. This was a training race, not my “A” race. That means I didn’t train specifically for this race and I didn’t taper the week before. In fact, I did a speed workout three days before this race. I ran this race at the end of Week 9 in a 24-week training plan; I’m not even half-way through it, and I attempted a race that’s at least half as hard as the Badger Mountain Challenge 50K. I was reminded of how important strength training is, and why I need to make it a priority. I’m still confident I can do BMC50K.